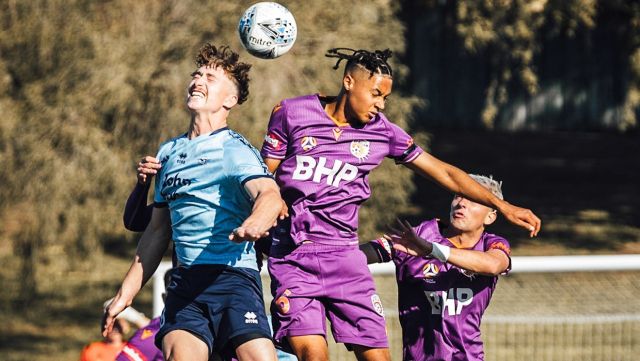 Sorrento approached the business end of the season with 4 games to go, in 3rd place against an in-form Perth Glory side, knowing they needed a win to maintain pressure on the top 2.

It could not have started any better as a great ball from Alex Morgan put Jordan Brown through on the right and he ran past the Glory defence, chested the ball down and fired the ball into the far corner.

For the remainder of the first half the teams cancelled each other out and the Gulls went in 1-0 up at the break.

Early in the second half, Jordan Roberts forced Glory keeper Sam Reilly into a smart save.

Then on 57 minutes Roberts pulled up with what looked like a hamstring strain and was replaced by Chris Jackson.

Chances at both ends followed as keeper Connor Campbell saved well from Glory striker Anasmo, then Jackson was unlucky not to extend Sorrento’s lead as his shot cannoned off the bar.

In the last 15 minutes, the Gulls saw out the game with some robust and disciplined defending while still remaining a threat on the counter-attack.

The victory saw the Gulls move 6 points ahead of Glory in 4th place and 2 points behind Floreat Athena in 2nd place.

On Saturday, the Gulls face league leaders Perth SC at Dorrien Gardens, knowing that victory would keep them in the race for the title.